Before Merlyn Climate Grants, there was Merlyn's Pen: The National Magazine of Student Writing. It mentored and published serious teen writers for a classroom readership that peaked at 100,000. Many novelists today, including Amity Gaige, Dara Horn, Curtis Sittenfeld, Alex Taylor, Theresa Meyers, and David Barr Kirtley, found early encouragement and publication in Merlyn's Pen. The NEW LIBRARY OF YOUNG ADULT WRITING archives the memorable works of Merlyn's Pen. Beautiful illustrations by premier artists showcase many selections, and many important works also have lesson plans and compelling audio recordings. For a quick introduction to the Library's many treasures, search for "Editor's Choice" selections or "Illustrated Works" or both. 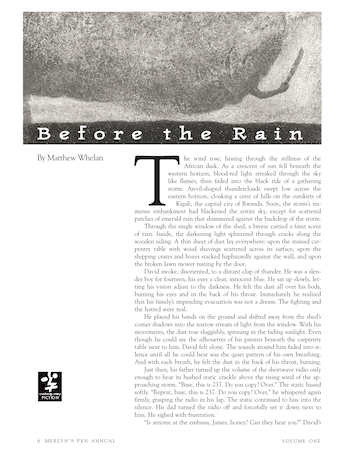 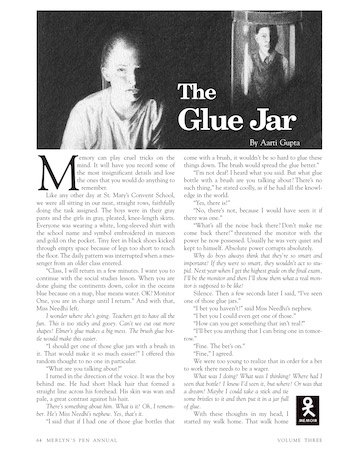 3. Prophets
Read This Work
Listen To This Work
By Brennan Stasiewicz, Grade 11, Watkins Mill High School, MD
Jim succeeds in tunneling from one side of Mt. Flea to the other. Success brings him the fame and attention he sought, but once the attention subsides, Jim sees that feats such as this will not make him a big man.
Genre: Short Story
Topic(s): Fable/Parable  • Friendship  • Childhood  • Games
Published in Merlyn's Pen Vol. 2, Issue 1 Senior High Edition
Also appears in these Merlyn's Pen publications:
Writing Tall, Juniors
Has been reprinted and/or translated in these countries:
China, Hong Kong, Japan, Taiwan, Turkey 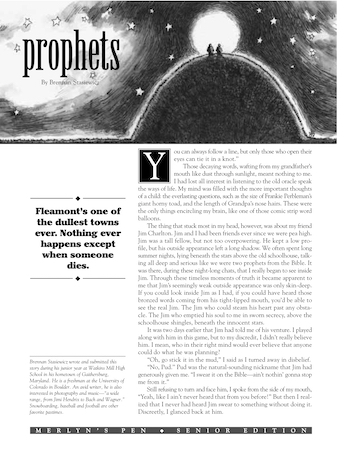 1. Like Mark Twain, the author often uses a combination of down-to-earth regional dialect (“Ain’t nothin’ gonna stop me from it,” “The days passed by like a slug through warm beer,” “all liquored up”) and complex, even lyrical narrative (“Decaying words, wafting from my grandfather’s mouth like dust through sunlight,” “above the schoolhouse shingles, beneath the innocent stars,” “The fireworks took flight over the small pond and winked back at me”). What effect does this “dual” narrative voice have for you as a reader? Do you find the contrast in language funny? Jarring? 2. Fleamont, Oklahoma, is described as “one of the quietest and dullest towns there had ever been.” How important is setting to this story? Would Jim’s “feat” have attracted much attention in a large, busy city?

3. Does the grandfather’s saying, quoted in the first paragraph of the story, have any connection to the plot? Does it have a symbolic meaning? In your opinion, is this a good opening, one that “hooks” the reader into the story, or would you have preferred an opening paragraph that introduced Jim Charlton and focused on his character?

4. Tall tales usually focus on a larger-than-life character (for example, Paul Bunyan) who accomplishes amazing deeds of strength, cleverness, or daring. Would you describe “Prophets” as a modern-day tall tale? Why or why not?

5. Is there any practical benefit gained by Jim’s “battle against the odds?” Is it heroic or pointless? Must a deed have a useful purpose to be great, or is it enough for a hero to scale Mt. Everest, like Sir Edmund Hillary, “because it’s there”?

6. “Mt. Flea was the last time I ever saw Jim try to overcome his weaknesses. Mt. Flea was the first time he failed, and I guess this is what changed him.” Based on the context of the story, would you say that Jim has changed for better or worse? Can failure ever be a positive experience? If so, how?
3. "Prophets" ESL/EFL Plan
Read This Plan
By Janet Isserlis for Merlyn's Pen
Grade Level: 7,8,9,10,11,12
4. Moment in the Headlights
Read This Work
By Ryan Conroy, Grade 11, Oldham County High School, KY
The narrator takes a bus to school every day, but wishes she could drive. One day, when the bus runs into a ditch, the narrator gets behind the wheel and drives for the first time.
Genre: Short Story
Topic(s): School  • Adventure  • Family  • Driving
Published in Merlyn's Pen Vol. 2, Issue 3 Senior High Edition
Also appears in these Merlyn's Pen publications:
Juniors: Fourteen Short Stories by Eleventh Grade Writers
Has been reprinted and/or translated in these countries:
China, Japan 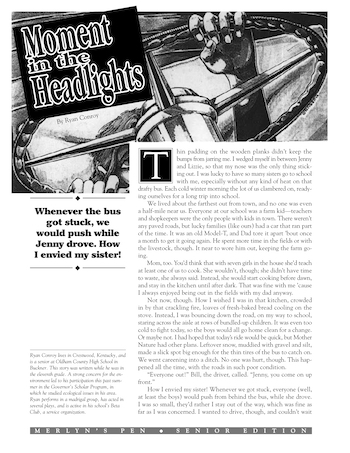 1. "Moment in the Headlights"
Read This Plan
By Brenda Vumbaco for Merlyn's Pen
Grade Level: 7,8,9,10,11,12
5. Chauvinist Knights and Feminist Damsels
Read This Work
By Selene Smith, Grade 9, Newfound Regional High Schoo, NH
Kayla is adamantly opposed to her arranged marriage to Lord Kevin--but thanks to a lucky turn of events, and a kind dragon, she is able to avoid the marriage and escape with the man she loves.
Genre: Fantasy
Topic(s): Feminism  • Marriage  • Family  • Romance  • Animals
Published in Merlyn's Pen Vol. 10, Issue 2
Also appears in these Merlyn's Pen publications:
Freshmen: Fiction, Fantasy, and Humor by Ninth Grade Writers
Has been reprinted and/or translated in these countries:
Japan 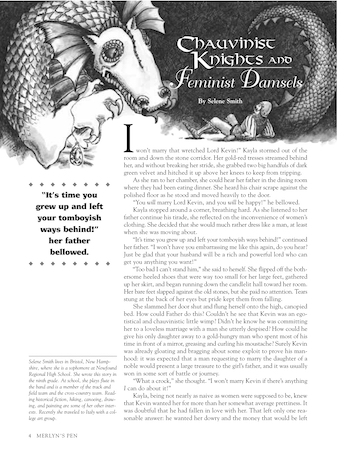 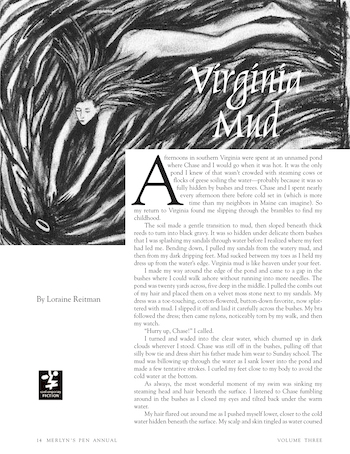 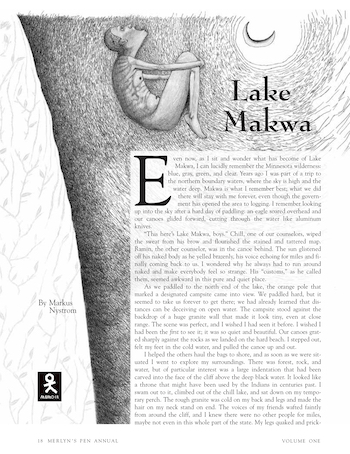 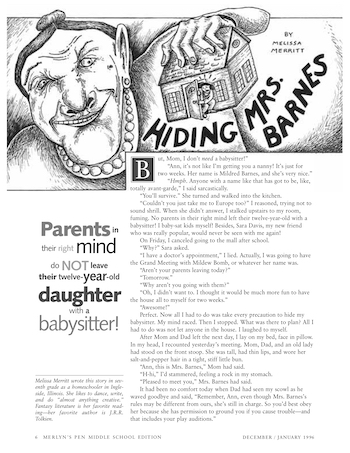 9. More Than Human
Read This Work
By Sean McCoole, Grade 7, Hollis/Brookline Junior High School, Hollis, NH
A computer programmer has created the ultimate computer: it has feel, it can think, it can be a friend. But can his invention stand up to human greed?
Genre: Science Fiction
Topic(s): Technology  • Friendship  • Sacrifice
Published in Merlyn's Pen Vol. Annual #4, Issue
Editor's Choice Selection 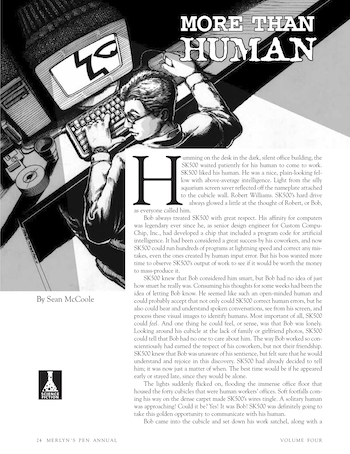 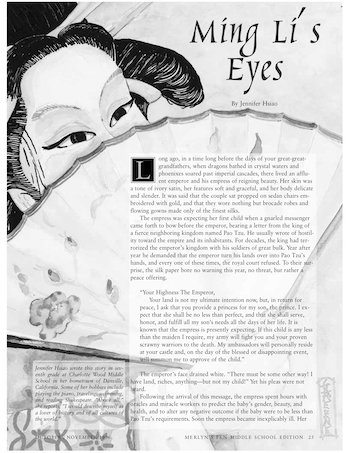 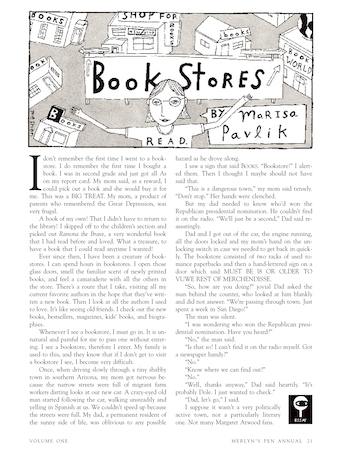 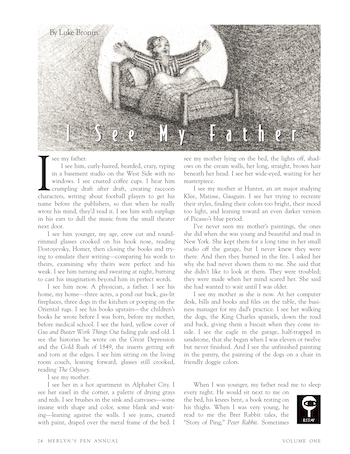 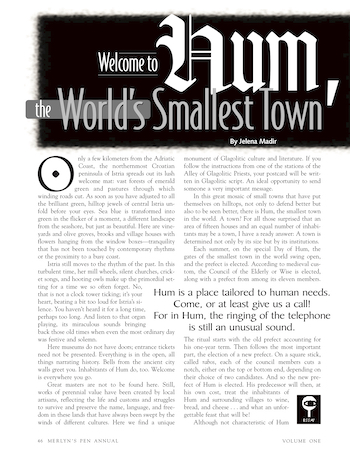 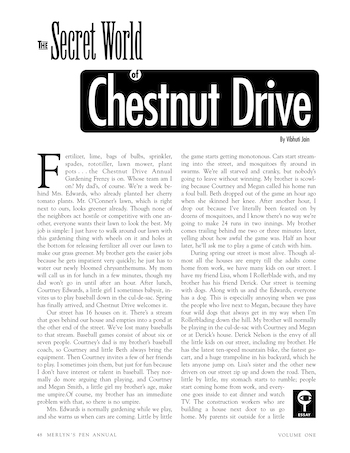 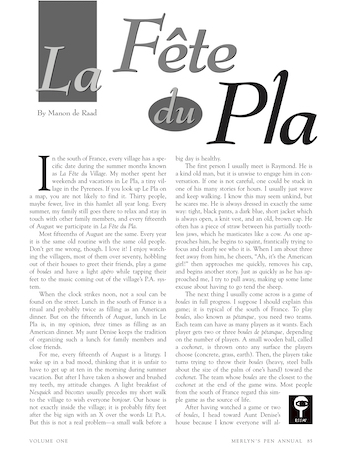 24. Popularity: An Outsider's View
Read This Work
By Stephanie Grant, Grade 9, Thomas Jefferson High School for Science & Tech., VA
The narrator reveals her thoughts and feelings as someone who was not popular in elementary school. The ridicule and rejection she endured have made her a stronger person.
Genre: Essay
Topic(s): Popularity  • Outsiders  • Acceptance  • School  • Cruelty
Published in Merlyn's Pen Vol. 12, Issue 1
25. Are We Having Fun Yet?
Read This Work
By Ryan Levy, Grade 9, Millburn High School, NJ
The narrator gives a humorous account of her family's trips.
Genre: Essay
Topic(s): Family  • Family  • Seasons  • Seasons  • Travel
Published in Merlyn's Pen Vol. 10, Issue 3
| Next >>
Copyright © 1985 to 2022. All Rights Reserved. Individual works in the New Library may be reproduced for one-time, personal use only. Other reprinting, reuse, or distribution, online, electronic, or otherwise, is not permitted without the express written permission of the publisher.